What’s the Difference Between Straw and Hay?

If you are getting ready to build your own home, and are sourcing straw bales, then you may find yourself asking- “What’s the difference between straw and hay?” Some people use hay and straw interchangeably, and this can be confusing for a prospective owner builder. So let’s take some time to clear this up.

Hay is most often a legume crop, grown for animal consumption. The (often greenish) bales can include alfalfa and clover. They often also contain grasses and other plants (and weeds) that were growing in the field. Cheaper hay bales can contain seeds of unwanted plants, and so cause a problem for people using them as mulch for their gardens.

Hay is harvested whilst still alive, and then dried. The bales are a great food source for livestock during drought times, and when pastures are otherwise unavailable. As you can imagine, the nutritious quality of hay also makes the bales attractive to rodents.

Straw is a byproduct of the grain industry. It is high in cellulose, and of poor nutritional value. Sometimes it will still be fed to animals, but only when there are no other options available. 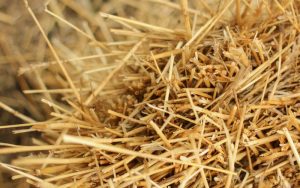 Straw makes good garden mulch. It is slower to decompose than hay, and doesn’t contain as many seeds as some weed-ridden hay bales.

Because straw stalks are left to completely dry out before being cut, the bales have much less moisture than hay bales. High moisture content in straw bale walls will lead to rot, which is not a cheap or easy problem to fix.

What Straw Should I Use For a Straw Bale House?

Now that you know the difference between straw and hay, we should talk about the different types of straw.

Generally speaking, most cereal crop straw is okay to use for building. You should avoid pea straw as it contains leaf matter and the stalks are not as strong as wheat. We typically recommend wheat because the load tests were done on wheat straw, and it is readily available.

It is also advisable not to buy your bales from a fodder store, as they will not be compressed enough for building purposes, and will cause problems when installed into your walls.

Do you have any further questions about straw bale walls? Or are you ready to start your owner builder adventure? Please let us know in the comments below!

If you would like to know everything there is about building your own straw bale home, consider signing up to our online owner builder course. We offer a 30 day money back guarantee, so you can work through the first 4 weeks risk-free!

AgDaily- The Differences Between Hay and Straw